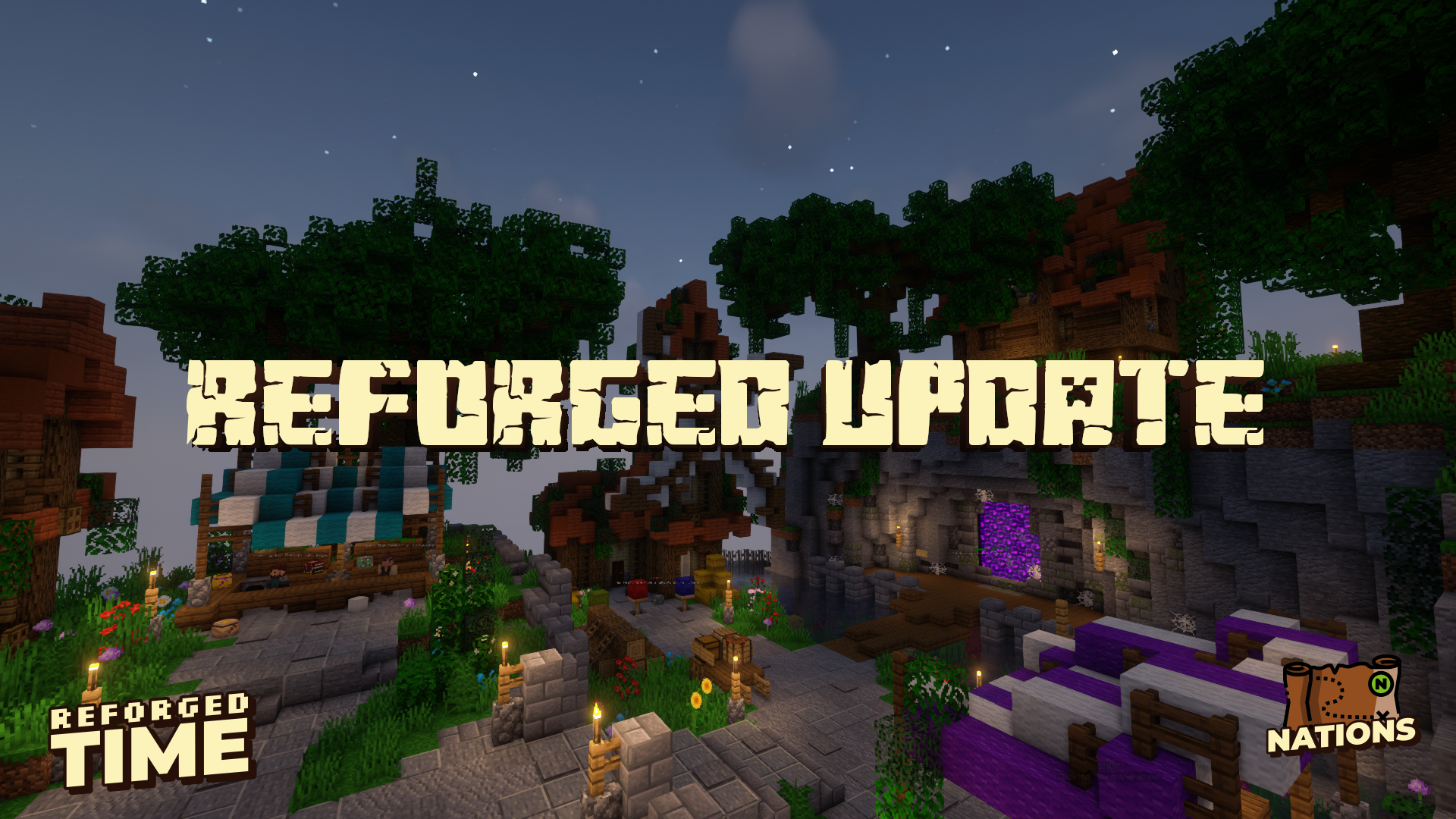 
In this post, the changes to the Nations gamemode will be stated. If you want to read more information on the Reforged Update, please refer to this post.


Changelog
• [FEATURE] A new layout for the inventory for Nation Interaction has been added
• [FEATURE] A new layout for the inventory for Nation Settings has been added
• [FEATURE] Both items for confirming and denying a purchase of slots or claims now have their lore updated to fit on one line instead of two
• [FEATURE] Creating a Nation might not create the Nation instantly, a message is sent when the Nation is created
• [FEATURE] Creating a Nation will no longer set your spawn, this prevents you from setting your spawn inside another Nation
• [FEATURE] In global chat, the Nation will now have a green color to prevent miscommunication
• [FEATURE] Nations now has a custom tablist
• [FEATURE] No message will be sent that chat messages are unverified*
• [FEATURE] Participating in a war as Nation will now grant coins: 100 for the losing Nation, 200 for the winning Nation
• [FEATURE] The inventory for Nation Settings now contains an item to return to the Nation Interaction inventory
• [FEATURE] The inventory for promoting a player to the leader of a Nation will now contain an item that gives information about the player you want to promote to the leader
• [FEATURE] The inventory name for promoting a player to the leader of a Nation has been changed to "Promote to Leader", before "Promote (Target)"
• [FEATURE] The inventory name for seeing the current war has been changed to "Nations Wars | Current War", before "Nation Wars, Peace"
• [FEATURE] When items are bought whilst the inventory is full, the items will now be dropped on the ground
• [FEATURE] You can no longer select more slots or claims to purchase than the set limit on Nations for this, currently 75
• [BUGFIX] A bug regarding inflation or deflation kicking in way too high has been resolved
• [BUGFIX] A bug regarding the price of your purchase has been resolved
• [BUGFIX] A bug regarding the shop items being reset to default blocks has been resolved
• [BUGFIX] The hitpoints from gates in wars are not consistently named "hitpoints" instead of both "hitpoints" and "health"
• [BUGFIX] The items inside the inventory showing Nations that have declared war on you now have the correct lore: "Declared war on your Nation", before "Click to declare war on (Aggressor)"
• [BUGFIX] The name above the player will now display their rank
• [BUGFIX] The tablist should now be ordered correctly
• [BUGFIX] The teleport message now displays the correct text
• [BUGFIX] When a war is declared, the target Nation will now receive a custom message: "(Aggressor) declared war on your Nation!"
• [BUGFIX] When changing Nation settings, the settings inventory should be updating for all players that currently inside the settings inventory
• [BUGFIX] When demoting a player, it will now display the correct message
• [BUGFIX] When peace is made, the target Nation will now get a message: "(Aggressor) has made peace with your Nation!"
• [OPTIMIZATION] Database updates are now only executed whenever needed and the updates will be clustered together as much as possible
• [OPTIMIZATION] Partial code optimization

*This feature has been implemented to prevent your screen from being obstructed since BungeeCord always has unverified messages. This means that the chat-report system from Microsoft still has the ability to be used.


Bugs
If you do end up finding any bugs, be sure to report them either on the forums under the bug-report section or in our Discord. If you report a bug, please provide us with the following:
• Describe what the bug you have found is
• Provide us with steps how to replicate this bug
• If you can, provide a screenshot and/or video from the bug (this is not mandatory)
~ Zeldaboy111 | Reforged Time Manager | Reforged Time Developer
Zeldaboy111 · 4 months ago · Last edited: 4 months ago
«1»